The media has become the primary medium in which politicians reach their publics. Although hosting live debates, press conferences and news reports have been increasingly helpful in reaching their audiences throughout the years, the ever-growing trend of social media has taken the political world by storm. Politicians today have the luxury of marketing themselves over countless social media and online platforms. Over recent years, candidates have utilized these growing sites to further their campaigns and to get their name out there; however, these sites can cause people to form judgements based on the group rather than their own personal opinions.

Groupthink theory is when a group makes a decision without analyzing all of the options and deciding based on maintaining the group unity, rather than what is best overall. We see the idea of Groupthink in followers of candidates like Bernie Sanders and Ben Carson. Supporters of Bernie claim to be democrats, but are they claiming this because of what they believe or are they simply fitting into a precreated mold? Same with Carson’s supporters – are they focused on the issues or maintaining the title of “Republican?” 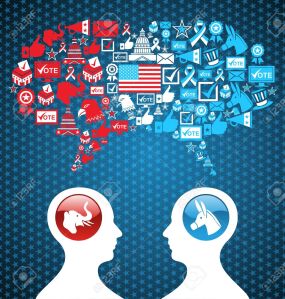 Democrats and Republicans have specified views of what they believe, and these views are often polarized. For example, democrats are known to support change for global warming, LGBT rights, peace rather than war overseas, and evolving governmental policies. Republicans, on the other hand, are known to support keeping government out of personal lives, stronger military action, and ensuring America stays rooted in its original ideas and upholding tradition. Upon visiting Bernie Sanders website, one can immediately see his blatant liberal views. Under the “issues” tab, there are countless links to guide a visitor to Bernie’s platform on topics like: “climate change and environment,” “fighting for LGBT equality,” and “war should be the last option.” After visiting Ben Carson’s website, the same holds true, but for Republicans. The “Issues” tab displays, “protecting innocent life,” “protect the second amendment,” and “keep faith in our society.”

While it is easy to see these websites as simply a way of marketing a candidate, we, as students of Communication Studies, can recognize a pattern of Groupthink. In other candidates such as Donald Trump, the idea is Groupthink is not as prevalent because his views are so radical. It is imperative to this nation’s political system for voters to be confident in their beliefs before stepping up to the ballot box, rather than the idea of associating themselves with one political party.

Are you guilty of groupthink or do you form your political views based on your own thoughts and opinions?
-Nick, Melanie, Mary & Patrick