Many large brands use their historic background to promote their product. Pepsi Cola, a known trademark product distributed all over the world, uses their product’s birthplace to market and draw in more customers. Pepsi recognizes the push to buy local as they advertise heavily in North Carolina, as well as adjacent states. “Born in the Carolinas” is an official trademark of Pepsi Cola. New Bern, North Carolina is the location where Pepsi was first invented in 1898 by a local pharmacist and University of North Carolina at Chapel Hill graduate named Caleb Bradham. According to the official Pepsi Store website, http://www.pepsistore.com/, the “Birthplace of Pepsi is owned and operated by the Minges Bottling Group located in Ayden, North Carolina, and first opened the doors to the Birthplace of Pepsi Store on the 100th Anniversary of Pepsi-Cola in 1998.” Seventeen years after the invention by Caleb Bradham, a man named Roy C. Megargel, a well-known broker, bought out Pepsi-Cola as well as the Pepsi trademark and immediately formed the Pepsi-Cola Corporation as it is known today.
When Pepsi was founded in 1898, it was originally called “Brad’s Drink” and was later patented as Pepsi-Cola. In recent years Pepsi has released a series of new ad campaigns aimed at reviving sales of its brand. Sales of the Pepsi beverage have recently been declining compared to its number 1 rival Coca Cola. To more effectively advertise and increase sales, Pepsi marketed a new advertising campaign that aims to “capitalize on rising soft drink sales,” which have been in tight competition with the variety of Diet Coke products. One of the most recognizable TV commercials openly takes a shot at their rival Coca-Cola brans, by starring Santa Claus shunning a Coca-Cola in favor of a Pepsi. The company has also since spent close to $60 million on a promotional deal with the popular show “The X Factor.”Coca-cola still outsells Pepsi worldwide and in most of the US but there are exceptions such as India and Guatemala. Also, in Buffalo, New York, Pepsi outsells Coca-Cola nearly 2:1. Pepsi continues to attempt to improve their brand as they compete with Coca-Cola and other soft drinks. 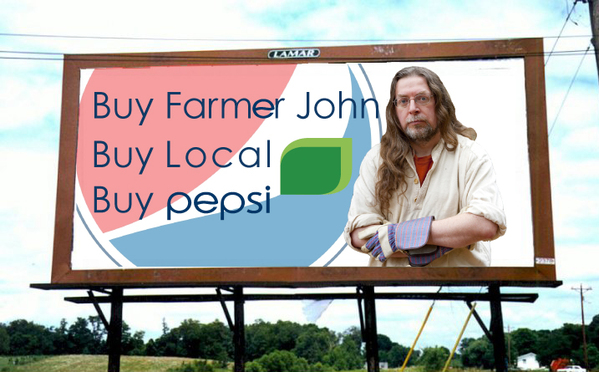 Pepsi has had a vast variety of slogans over the years. The first slogan was “Twice as Much for a Nickel” and lasted from 1939 to 1950. Since then, there have been many more Pepsi slogans including “Say Pepsi, Please” (1957), “The Choice is Yours” (1992), and “Live for Now” (2012). In the 90’s they also had a mascot named “Pepsiman” who appeared in 12 different commercials delivering Pepsi to quenched individuals. He even appeared in a few video games as well before they retired him.
Even though Pepsi has practiced many marketing strategies over the years in an attempt to outsell competitors, they have always stayed loyal to North Carolina. With the economy in such a state, local governments are urging citizens to shop local. Pepsi has recognized this marketing fad and has hopped the bandwagon. Though there are many Pepsi distributing centers worldwide, the birthplace will always be New Bern, North Carolina, which makes “Born in the Carolinas” a lasting slogan.