With baseball’s 2012 Fall Classic in full effect, sports lovers from all over the country have tuned in to see whether the Detroit Tigers or San Francisco Giants are going to be this year’s World Series champions.  Those who missed game one of the series that took place on October 24th, missed one of the most moving phenomenons ever to take place on a baseball field (no it was not Pablo Sandoval’s historic three-homerun night).  Over 40,000 people showed their support for the Stand Up To Cancer (SU2C) foundation as they held a placard that read “I Stand For” followed by a name of someone diagnosed with cancer written by the holder of the placard. 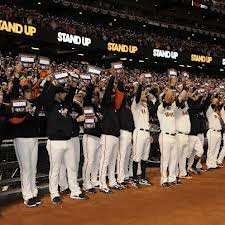 SU2C is an innovative project created to accelerate advanced cancer research that will quickly provide therapies to patients and save more lives.  They have taken a different route in promoting their brand by collaborating with other cancer foundations instead of competing against them.  The foundation is currently teamed up with six other cancer foundations and four research teams.  What really stands out about their brand though is the level of involvement they have with our society.  Aside from having game one of the World Series dedicated to the foundation this year, the foundation gathers much support from the entertainment industry.  Many of today’s well known celebrities are advocates for SU2C and even partook in a fundraising event that aired on national television.

The show was dedicated to the 13 million US cancer survivors and generated over $81 million.  The show was a very motivating rally against the disease and was topped off with stellar performances from Taylor Swift, Alicia Keys, Tim McGraw, and Coldplay.

SU2C could not have done a better job promoting their brand and their foundation.  By gaining support from all of the biggest names in Hollywood and Sports, they have gotten the attention of people all across the country and with all of this attention and publicity will come support.  SU2C is a great foundation fighting to cure a terrible disease and with their successful promotions, they will gather surplus amounts of donations and support.