It is no secret that women in America are under extreme pressure to be slim. Products like Slim-Fast, QuickTrim, and Hydroxycut are just a few examples of what women are buying to live up to this cultural expectation. I’ve seen these items and have simply written them off as another weight loss scheme. Nothing about them really struck me as odd, or even unhealthy. However, the other day I heard a commercial that made my jaw hit the floor. That commercial was for Slimful. Take a look for yourself.

I honestly thought it was a parody commercial that was making fun of how idiotic some products are, but, oh, how wrong I was! I immediately began researching this product to see if it was really as ridiculous as it sounded. The commercial ends with the statement “eating less is a beautiful thing,” and this is exactly what the product promises and promotes. The idea is simple: eat a Slimful chew, drink a glass of water, and you won’t be hungry for hours. 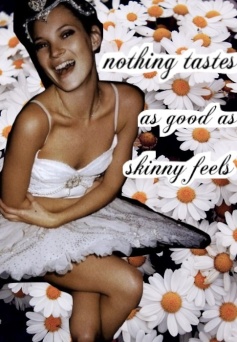 There is no mention of combining the product with an exercise program or a healthy diet. The website does say that the idea is to eat less, not to stop eating at all. However, it is no secret that many girls and women struggle daily with eating disorders. What message is a commercial like this sending to those struggling with anorexia or bulimia? It sounds an awful lot like encouragement to me. The commercial blatantly says it is not only okay to eat less but that actually it is a beautiful thing to eat less.  Looking at this advertising campaign from a health communication perspective, it becomes increasingly hard to ignore how dangerous a commercial and product like this could be. In advertising, the meaning of the message is often defined by the audience receiving it. Ignoring the impression this commercial could make on someone struggling with an eating disorder is heinous. The campaign helps to perpetuate the idea that thinness, and therefore frailty is beautiful in women, not strength. The commercial also further extends the idea that eating less, rather than doing more is the way to achieve a desired weight or look.

Advertisements like this are just one of the many factors that play a large role in the creation of the cultural expectations women are held to. The rise of social media sites such as Twitter, Pinterest, and Tumblr, have accelerated the spread of these unrealistic expectations to a new level. Media still sets the tone for cultural stereotypes, but social networking sites have the power to expand and develop them unlike any tool in the past. Individuals are able to chime in with their opinions and like-minded groups begin to form.

What troubles me the most about this advertising campaign is the life it could potentially take on in the Pro-Anorexia (Pro-Ana), and Pro-Bulimia (Pro-Mia) social media communities. This article from the Huffington Post begins to explain the debate currently happening on Twitter and in these online communities. The hashtags “#proana” and “#promia” are used on Twitter to indicate support and encouragement for those with eating disorders. These hashtags raise concerns because often the users are not trying to help each other beat the disease but rather they exchange advice on how to become a more “successful” anorexic or bulimic. As the article explains, this is truly a complicated issue. Some people are calling

for a ban on this type of communication and support. Tumblr and Pinterest, which are largely centered around visual content, have already begun to take steps to slow down the spread of Pro-Ana and Pro-Mia content. However, censoring Twitter content quickly brings up arguments over the first amendment which will slow down any ban decisions in progress.

Additionally, as this article from the New York Daily News discusses, some people argue that these communities can actually provide support for girls trying to recover. This argument grew out of a study published in Health Communication. The study interviewed bloggers that write for Pro-Ana websites. The bloggers explained that the online communities provide a place where they can be understood. Eating disorders are a stigmatized illness that can often lead to feelings of isolation. If these online communities can provide emotional support for those suffering from an eating disorder that is unavailable elsewhere, how can destroying them be justified?

The Slimful commercial was released only a month ago and hasn’t received much attention yet. Only time will tell if the results will be as detrimental as one may imagine. There is no simple answer to the questions I’ve raised in this post. I’ve only touched the tip of the iceberg. It seems that more vicious circles are being created as social media continues to evolve, and this could be just the beginning.