Halloween can sometimes be repetitive. Costumes and decorations change but the act of trick-or-treating has stayed the same. However, one company is trying to change how people collect candy on Halloween. This company decided to not only change the process of buying costumes and decorations, but to be innovators of the holiday.

Target created an interactive youtube video that allows viewers to virtually tour a haunted house decorated by products available at their stores. The six-part video series, dubted “The House on Hollow Hill,” targets Halloween enthusiast or those looking to throw a Halloween party. Kristi Argyilan, senior VP-media, guest engagement and measurement, says these particular people are very busy, so Target allows the viewers to buy the products in the videos. They offer a 10 percent discount to anyone who watches all of the videos — a real treat for Halloween lovers. Target is not only changing how to shop for Halloween but how to trick-or-treat. They did this by creating a website and cohesive smartphone application that allows trick-or-treaters to locate the best houses to visit. The mobile site, titled “Treatster,” relies on crowdsourcing to “upvote” registered houses. 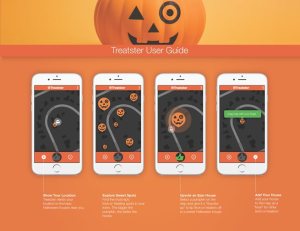 Using the Diffusion of Innovation Theory, Target is introducing an innovation hoping to connect groups of people to reach a common goal. They do this through the channel of a virtual reality series and a mobile platform for consumers. Target is using these mediums as a communication channel to capture eventual repeat customers by offer a unique experience that consumers will remember and an incentive to buy their products. This is a new avenue of marketing they are exploring in hopes that it will catch on and create a culture for their brand.

Do you think Target will have success changing this aspect of Halloween? Why?

Know of any good houses to trick-or-treat? Tag them!

Football season starting up and so are the advertisements. Target, Dicks Sporting Goods, and Best Buy are some retailers advertising “essentials” for game day and football season in their print ads and online.

By defining particular items as necessities for football season and tailgating, retailers are creating their own definitions of tailgating and narratives of what the tailgating experience should be like for consumers. 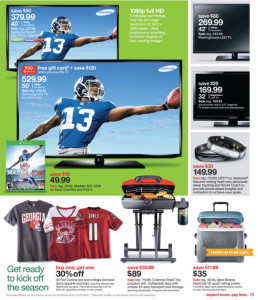 By showing consumers products that are considered “game day essentials,” retailers are building their own narratives about the tailgating experience. Each retailer’s idea of what commodities that experience requires may be different based on the products sold at each business and their target audiences. Those that want the full experience are more likely to buy into a store’s ad and purchase the products retailers suggest.

It’s not necessarily about what the consumer realistically needs for a tailgate. These ads for “must have” items are more about creating an idea that makes a consumer feel that without those items, they aren’t getting the best game day experience.

These advertisements are an example of how today’s market is controlled by commodity culture – we define ourselves by the stuff that we buy. Typically, big businesses are able to sell higher ticket items based on a consumer’s need to feel like they fit in. Both the beginning of football season and the end are big opportunities for retailers to convince consumers that these products are what they need for the perfect football celebration. Football fans define themselves by having the best game day items for the season; new TVs, new grills, new gear, new everything. Retailers are ready for football season, and now the fans will be too.

False advertising is defined as “the use of false or misleading statements in advertising, and misrepresentation of the product at hand.” Since advertising has become a common tool for companies, brands must be fully committed to ensuring all promotions and products are accurate.

This past week it was reported that Target will be paying nearly $4 million to settle an ongoing lawsuit. Northern California lawyers filed the suit because they claimed Target’s product prices were higher than originally advertised. In the lawsuit, they are also being accused of pricing differences at the checkout for products that have to be weighed.

A Target spokesman responded by stating that some promotional signs were not removed in a timely manner after the promotion was over, resulting in a advertising a price that was no longer valid. Due to the inaccuracies, the company is dedicating itself to more improved price-accuracy techniques.

In just this year there have been numerous alleged false advertising cases. Cablevision sued Verizon for false WiFi advertising; Vitamin, Supplement Industry is claimed to not properly advertising health risks; and a woman even sued the film Fifty Shades of Grey for misleading expectations.

But how is a company really affected by its false advertising? Consumers can lose trust in the business and the brand may have to pay large amounts to settle lawsuits. For a company as prominent as Target, consumers who once trusted the brand may not any longer. By misleading the public’s perception, it can ultimately change the consumer’s behavior–such as purchasing.

The Federal Trade Commission  works diligently to protect consumers in a competitive market. In 2010, Kellogg’s Rice Krispies had been caught by the FTC for making false health claims on the box of cereal and had to stop advertising until the claims were accurate.

Advertising is initially intended to persuade consumers to act, but when those advertisements are false, it can backfire. Because Target made a public statement that they are working to improve their price-accuracy methods, it is an attempt to maintain their consumers’ credibility.
Do you think there’s a difference between false advertising prices versus health claims?

Target and Walmart are arguably the two most popular shopping venues for back-to-school shopping across many grade levels. Studies have been conducted to see how each company’s’ marketing tactics reflect in their prices. In 2012, Time reported that overall, Target saved customers only 46 cents for every 100 dollars spent, however, “what appears to have put Target ahead, at least for the time being, is a blitz of seasonal and back-to-school discounts and promotions.”

Target has done it again this year with its back-to-school themed television commercials that are directed towards students and parents alike. The majority of Target’s commercials seek to reach elementary and middle school aged kids, depicting real-life scenarios of heading back-to-school.

Through epideictic rhetoric, Target’s back-to-school advertisements illustrate a world that children want to live in now, whether it’s going back to school with the perfect supplies or by conquering his or her fears. Many children experience a sense of ‘back-to-school fever’ and Target hones on that.

Although, the company has gone further this year, enlisting songs circa 1981 to serve as the background music of the commercials. The parental demographic likely went to school themselves during this time and can easily recognize the songs “I just Can’t Get Enough” by Depeche Mode and “Kids in America” by Kim Wilde. Target has personalized this media to parents, who will be making the purchases, by playing the songs to a more child-friendly tune. The advertisements create a sense of nostalgia for parents, encouraging them to reminisce on his or her own school days.

This connection created through the media from seller to consumer could potentially make this brand stand out from others and illustrates Wilbur Schramm’s Source-Message-Channel-Receiver Communication Model. Target serves as the source by sending out the message, which is that they offer school supplies at a low cost. These advertisements and commercials illustrate the channel and, in this particular case, the receiver is the parents.

In the “Kids in America” themed commercial, Target also highlights a philanthropic motive through a giving campaign entitled, “Buy One, Give One.” This effort attempts to persuade consumers to buy the Target brand supplies because for each supply purchased, another will be donated to a child in need. Utilitarianism describes an effort that produces the greatest good for the greatest number of people. By deciding to shop at Target, as opposed to other stores, consumers are doing more good for a greater amount of children depending on how many items he or she purchases.

Target has made a great effort this back-to-school season to compete with other stores that have similar supplies at low costs. Do you think their tactics are effective in reaching out to publics?

As people all over the country start buying presents for the holidays, it becomes clear what consumers value most in the products that they buy. For some, it’s all about getting the best price, while others want to support small businesses and know where the products really come from. Target delivers the best of both worlds to their customers.

Target offers a variety of products at a great price for sophisticated design and style by the top designers in the country. Neiman Marcus is the next design company to join Target in their mission to offer affordable clothing at a price tag everyone loves for the holidays. And to support local businesses with their own flair, Target created “The Shops at Target” in May 2012, selling products designed by five small businesses from every corner of the country such as Polka Dog Bakery, Privet House, and The Candy Store. With a focus on the stories behind these small businesses, Target fostered consumer needs to buy unique, local products of these cities at the nearest Target. These businesses come from very different places with different stories to tell and share beyond their hometowns. The integration of these shops into Target stores makes it easy for buyers to find the latest video game for their sons and an inimitable gift for their eccentric aunt all in the same place!

This is why Target appeals to those consumers who value commodities that say something about who they are. Featuring the exclusive products offered by these entrepreneurs makes the consumer feel that they are buying something truly authentic, because they are produced directly from their stores.

Beyond providing convenience to customers, Target has given these small businesses a huge opportunity to grow. Take The Candy Store, for example. They have the chance to share a little piece of their brand with people all over the United States, even while their business continues to blossom in San Francisco, California. On The Candy Shop’s Facebook, they posted “Think big, shop small”, which seems to mimic Target’s brand, fashioning a symbiotic relationship. The owners, Diane and Brian Campbell, say their products are ones that “can’t be found anywhere else,” just as Target, offers products that stand out. Even more, the integration of “The Shops at Target” promotes an idea, and whenever a company can tailor an idea to their design, it becomes honorable and memorable.

All in all, Target attracts a wide variety of consumers by conveniently offering authentic brands that range from local businesses to luxury retail designers all in one store. With the incorporation of low prices and the pleasantly unexpected variety of small business products, Target definitely proves that they live by their slogan which is “expect more pay less”.