Life near the beach means seeing surf shops by the dozen.  And what do you think lies inside these surf shops? Brands like Roxy, of course.

In 1990, Quicksilver began a venture to create Roxy, a swimwear brand that encompassed the female surfer, the first of its kind in a sport dominated by men. The brand grew and was well received by the surf-ette, and Roxy even created the first women’s board short.

So what can we learn from Roxy’s brand identity?

1. Their products are for women.

2. They target these products to women.

The logo, two Quicksilver logos reflected against each other to create a go to feminine symbol, a heart, encompasses the brand’s feminine spirit.

Roxy took a plunge into a market dominated by menswear, and came out drenched in success. But Roxy faces a definite challenge-

How do you advertise an all women’s surf-wear brand, especially swimsuits, without receiving backlash for objectifying women’s bodies?

The answer? I don’t think Roxy has been able to do it yet.

Critics were quick to comment on this ad for the Roxy Pro Biarritz competition from 2013 featuring surf pro Stephanie Gilmore.

This is the teaser video that doesn’t reveal Gilmore’s face, but the focus on her body was enough to send consumers into a critique frenzy

Advertisements seek to sell the product to the consumer, and noise, like a consumer not paying attention, can affect the ads effectiveness. The problem is that women’s bodies, even men’s, are often objectified as a tactic to break the noise that can distract consumers. Sex appeal holds attention, it gets consumers talking.

What are some alternatives when advertising a ‘women’s’ brand? Vera Bradley tried last year in 2016 with their #itsgoodtobeagirl  campaign that was supposed to celebrate the everyday woman, and sell the luggage and handbag company’s products of course. 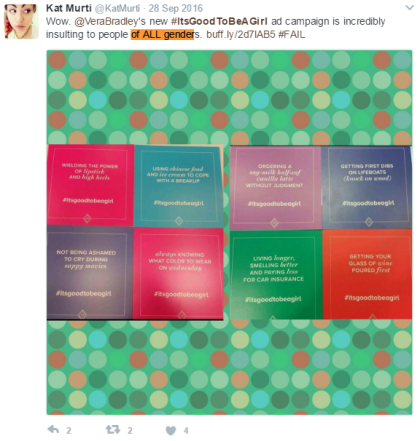 Consumers were OUTRAGED, calling the campaign sexist and offensive not only to women, but men as well (ouch). The campaign eventually released less abrasive content, and called on a more girl-power type approach by quoting inspiring women.

The hashtag #itsgoodtobeagirl is still trendy on Twitter today #PRsave. 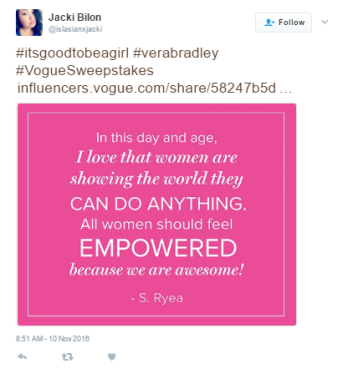 Gender objectification in advertising is obviously a hot topic to critique, but as everyone knows, sex sells. And when you’re trying to sell a product, you need to sell.

There has GOT to be a way in advertising that can celebrate and use the human body without objectifying it.

Since the Roxy Pro Biarritz scandal, Roxy has laid pretty low in terms of video advertisements.

The question is this, if you were Roxy, how would you continue to advertise your all women’s apparel and surf wear? Keep in mind surfing isn’t done in hoodies and sweatpants; it is done in swimwear, boardshorts, and wetsuits.  So…would you use sex appeal, or pull a Vera Bradley and try something risky and innovative (even if it could possibly fail at first)? 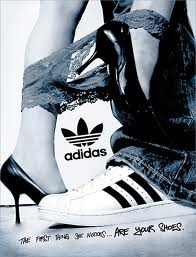 It’s undeniable that cancer is a scary subject, and breast cancer is no exception. One simple statistic summarizes just how un-discriminatory and prevalent breast cancer is: breast cancer is the most common form of cancer in women, no matter your race or ethnicity. With the whole month of October designated as National Breast Cancer Month, reminders for women to get mammograms and to screen themselves appear regularly. So how do you get people to face one of the scariest diseases out there? The answer is humor.

Rethink Breast Cancer is an organization dedicated to changing the perspective of breast cancer from scary, to preventive and manageable. Most notably, they want to change how awareness is taught. Rethink Breast Cancer has moved away from fear-based education tactics to using “fear-free, cutting edge messaging, multi-media platform reach and positive energy [that will] revitalize the breast cancer movement and motivate young people to action.” The YouTube video they have created for awareness has done just that.

With over six million views, the video Rethink Breast Cancer produced in 2011 has done a remarkable job of not only raising awareness for breast cancer, but also doing so in an approachable manner. Based on the premise that “women are more likely to watch a video if it features a hot guy,” it stars male models that educate the audience on how to check for breast cancer. Humor is interwoven throughout the video in scenes such as a female nurse tripping over a stool, and a slow motion of a male model bathing himself.

Together, all of these humorous scenes combine with raw education to make breast cancer awareness fun to learn about. By using a pop-culture medium, such as YouTube it is even harder to ignore the message. But most importantly, Rethink Breast Cancer is living up to its goal of helping to educate from a perspective of humor rather than fear. This is exactly the kind of video that women (and even men) will pass on to their friends, helping to spread the importance of proactively approaching breast cancer.

Carefully balancing humor and sex appeal, Rethink Breast Cancer has created the ultimate advertisement for spreading awareness on how to help catch breast cancer. By using humor the ad becomes persuasive and makes examinations less of a chore and more of a self-service. But is this particular message the way that survivors would want to caution the public? While it seems appropriate to use humor on occasion, could there be a point where humor starts to detract from the sincerity of the situation at hand? If ads like this can be successful for breast cancer could this type of levity be introduced in messages of other health campaigns?