With the start of fall comes much anticipated television network premieres. Major broadcasting networks debuted new series to compete with the established streaming community. Fox’s Minority Report, Scream Queens & Rosewood, ABC’s The Muppets, NBC’s Heroes Reborn, Blindspot & The Player, and CBS’ Limitless & Life in Pieces were expecting high ratings, but most did not meet expectations. The Muppets and Rosewood were the two exceptions.

With Netflix growing to over 65 million subscribers, the streaming platform has started to gain control of the TV market. AdAge reported every single TV network drama that aired on Tuesday night suffered a double-digit decline in ratings. One theory that could explain the drop in numbers is the Media Ecology theory.

Media Ecology theory is defined as the study of complex communication systems as environments, furthermore, how the medium in which the message is delivered is equally as — if not more — important as the message, itself. In this case, Netflix is taking advantage of its medium by being more convenient for the consumer. Viewers can stream content on multiple devices, anywhere, at anytime. According to Reed Hastings, Netflix CEO, all TV will move online by 2030, proving true to the theory.

While Netflix is currently thriving, network TV still has an appeal to viewers. Families still watch TV together and the anticipation of a new episode each week brings viewers back; a few disadvantages of Netflix. Although streaming is convenient, some viewers appreciate the ability to follow a show together as a community. However, Hastings believes the transition to an online platform is “kind of like a horse – you know, the horse was good until we had the car.” 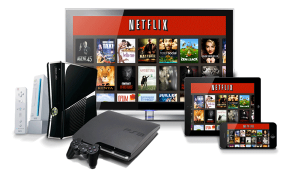 With networks still releasing shows next week, will they follow the current decline of network TV? As a viewer, do you prefer an online platform or network TV?