For the past few decades, the bulk of wealth in America floods to the top- 99% of the new income is going to the wealthiest 1%. Billionaires have the ability to agenda set and fund politicians for their own interests. The Koch brothers alone are projected to spend almost one billion dollars funding campaigns.

Elections, in turn, have become similar to television shows with aggressive personas rising to the top. Donald Trump, Ben Carson, and Carly Fiorina- whose politics have been called “post-truth” are jockeying for the republication nomination. On the Democratic side, there’s Clinton whose views seem to change in accordance with her largest donors. And the weird things is, people don’t seem to care. But is it really their fault? 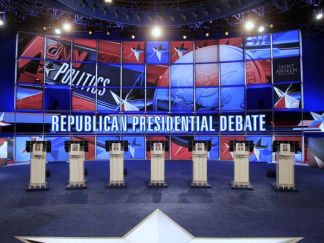 Politicians’ advertisements can be somewhat skewed to adhere to our wants and needs. We watch the political debates to see which candidate will resonate with our personal values, but all that is discussed are issues not solutions. The message the media projects about politics focuses on the conflict at hand. Is conflict ever resolved or is it just discussed? Politicians have the chance to engage with a wide audience, the debates streaming on TV and throughout social media. The engagement perspective of IMC says a message is intended to get a response from the audience. Will the audience reject or accept it? Will it change their behaviors once the message is received? The political debates allow candidates to persuade their audiences to think differently.

The media has an obligation, as a forum by which citizens receive their news, to provide viewers with relevant and truthful information. According to the agenda-setting theory, media influence affects the order of presentation in news reports about events and issues in the public mind. In the context of election time, news outlets control how the political candidates and issues are presented to their viewers.

If people get 90% of their information about politics from TV and the TV station’s parent company has an interest in the outcome an election, can the viewers be blamed for following along? How much responsibility should we place on journalists and media outlets? Has the concentration of wealth at the top of America’s population and the ability for wealthy individuals to shape our elections transformed our democracy?