Thanksgiving means lots of different things to different people.  For some, it is a chance to celebrate all that we are thankful for, for others it is an opportunity to reflect upon our nation’s beginning. Most people use the occasion to reconnect with family and friends but there is one unifying factor that drives the anticipation for all: the food.

From the first Thanksgiving in 1612, dinner has been the highlight of the event.  While it’s not likely that our founders dined on what is now considered to be the “traditional” Thanksgiving feast, they were no doubt thankful for the bounty. Today, it is not only the food that drives the holiday, but the brands that continue to supply our Thanksgiving favorites through the years. Thanksgiving staples include: stuffing, green bean casserole, mashed potatoes, cranberry sauce, rolls and, of course, Turkey! And don’t forget to leave room for the Pumpkin pie. 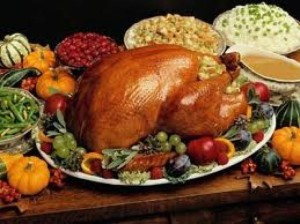 Most would agree that it’s just not Thanksgiving without a turkey, and Butterball has been providing the Thanksgiving bird since it was founded in 1940. Today, Butterball is the largest turkey producer in the U.S, providing 20 percent of the total turkey production in the country. Another brand essential to Thanksgiving dinner is Kraft. Kraft, which was founded in 1903, not only provides the Stove Top brand stuffing that complements the turkey so well, but Kraft also makes the French-fried onions that no green bean casserole would be complete without. Ocean Spray serves as the go-to brand for anything cranberry, including the cranberry sauce on your Thanksgiving table, and when you need something to soak up the extra gravy on the plate, chances are you’re reaching for a Crescent Roll – courtesy of Pillsbury. Finally, the Libby’s canned food brand has been around since 1869, and Thanksgiving chefs all over the country swear by their canned pumpkin in the perfect Pumpkin Pie recipe.

Just thinking about this tried and true combination of Thanksgiving brands is enough to make most people’s mouths water! So abandon your diets, put on your elastic-waisted pants and cut another slice of Turkey, Thanksgiving only comes once a year!

In 1621, the Plymouth colonists and Wampanoag Indians shared an autumn harvest feast that is acknowledged today as one of the first Thanksgiving celebrations in the colonies.  For more than two centuries, days of thanksgiving were celebrated by individual colonies and states.

It wasn’t until 1863, in the midst of the Civil War, that President Abraham Lincoln proclaimed a national Thanksgiving Day to be held each November.  To this day, the centerpiece of Thanksgiving in the United States is a large meal, centered around a large roasted turkey.  Thanksgiving dinner is not complete without the perfectly cooked turkey, but not all of us can be masters in the kitchen.  What happens if you don’t know how to cook a turkey?  Don’t sweat it!  It’s not a problem because now there’s the infamous Butterball Turkey Talk-Line if you need cooking assistance.

Butterball is a brand of turkey and other poultry products produced by Butterball LLC.  The company manufactures food products worldwide and specializes in turkey, deli meats, raw roasts, and other specialty products, such as soups, salads, sandwiches and entrees. Butterball operates the world’s largest turkey-processing plant in Mount Olive, North Carolina and sells over one billion pounds of turkey a year.  Butterball is so popular that one in every five turkeys sold in the United States comes from them.  How did this Butterball craze start, though?

Butterball has a talk-line open to the public on weekdays from 8am-8pm. But it now also has a website that offers consumers the opportunity to celebrate traditional holidays and everyday meal occasions with the Butterball branded line of products.  Whether it’s the annual family get-together or just a day in the office or at school, people can celebrate with Butterball turkey.  Butterball’s website provides a variety of recipes and ideas and also offers tips and how-to’s.  If you are a new cook or are just interested in watching videos on how to choose, thaw, stuff, roast, and carve a turkey, you now do so with Butterball.

In recent years, Butterball has become even more recognizable.  The Turkey Talk-Line number has grown to over 200,000 and it continues to increase with each holiday season. There are many brands that are associated with the holiday season; the next time you grocery shop for that Thanksgiving or Christmas dinner, Butterball won’t let you down. Happy holidays!