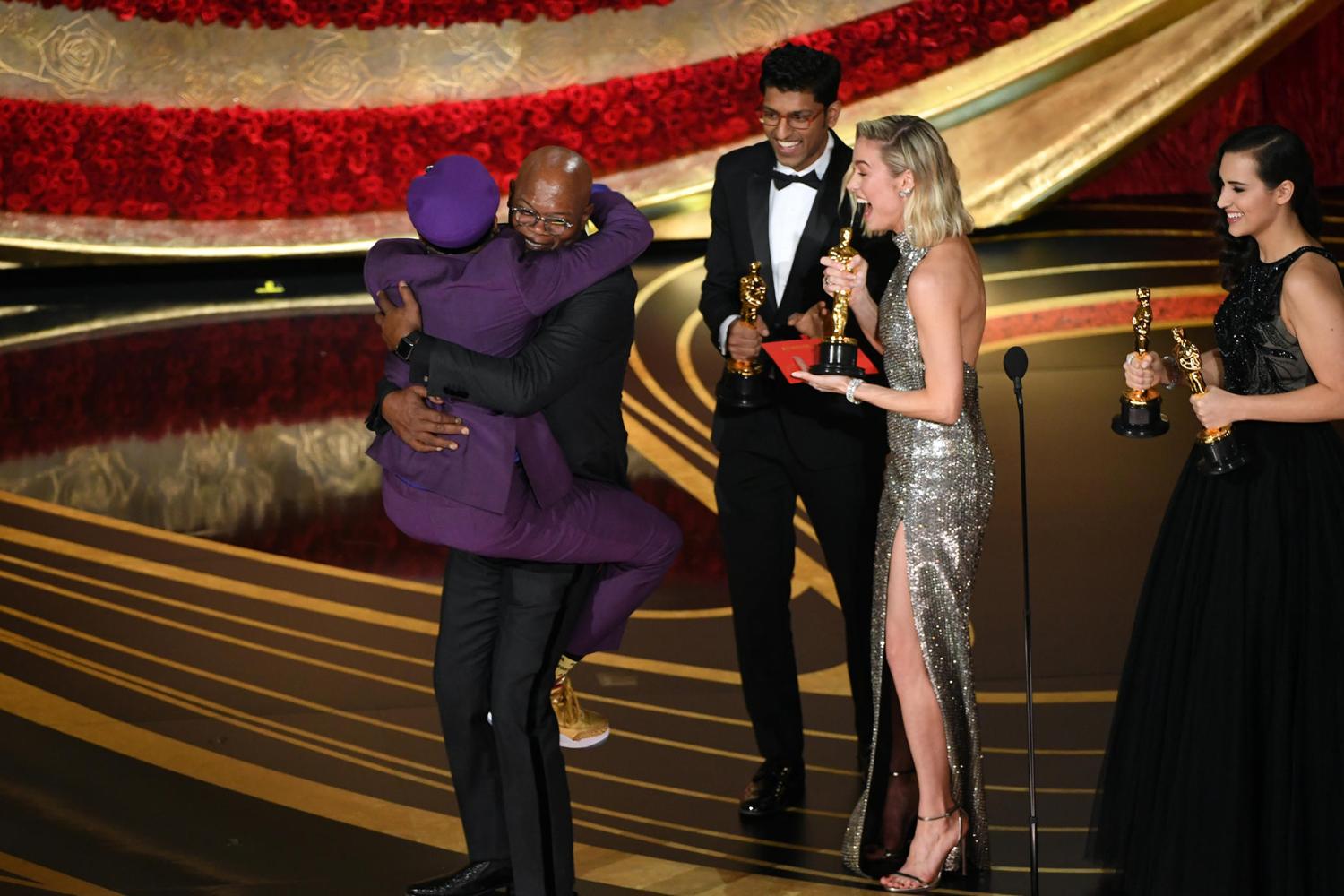 The Academy Awards were last Sunday, and I think it’s safe to say there were plenty of surprises throughout the night. From the program having no host, to Green Book unexpectedly winning Best Picture, there was plenty to talk over the course of the next few days. Although director Spike Lee supposedly storming out after the Best Picture reveal, and Lady Gaga and Bradley Cooper’s steamy duet made headlines, things that didn’t get as much recognition were the various advertisement campaigns geared specifically towards the Academy Awards audience.

It’s no secret that we are living in an age of recorded television and streaming services, and people have become impatient in general when it comes to sitting through commercials. Much like the Super Bowl, an awards show such as the Oscars are another example of a live televised event people tune in to in real time, and thus present the perfect opportunity to capitalize on viewers’ attention. While the adverts for the program didn’t cost nearly as much as those for the Super Bowl (according to Variety, 30 second advertisement spots for the Oscars cost between $2-3 million), it was very clear through the commercials’ content that they were advertising directly to the Academy Award audience, especially females.

One example of this was with Walmart’s ad campaign. It’s known that fashion and style contribute to some of the Oscar’s biggest moments—both on the red carpet and in the award categories. Walmart, one of the night’s sponsors, seized this night of culture and fashion as an opportunity to advertise their clothing lines, while simultaneously highlighting film crew members and stylists who work endlessly behind the camera to make “movie magic” happen. The various commercials reinforced the idea that if ordinary people such as Julia Roberts’, Rami Malek’s, and Chadwick Boseman’s stylists can be glamorous and creative while wearing Walmart, then you can too!

Another advertisement specifically aimed at women between the awards was a Budweiser commercial featuring Charlize Theron. In the commercial, Theron challenges female stereotypes while drinking her beer in a bar by challenging men to various games (billiards, darts, arm wrestling, etc.). An A-List celebrity, and a beautiful woman at that, was sure to capture and keep the attention of a time-shift-conditioned audience.

Another Academy-specific ad campaign came from Google. The company utilized clips from various iconic movies, such as 2001: A Space Odyssey, Lady Bird, The Hangover Scream, Jerry Maguire, Deadpool etc., and depicted how the scenarios could have played out differently had Google been present in each scene. The commercials assume that viewers of the Oscars are movie buffs, and know enough about the films to understand the references within the commercials.

What do you think? Do you believe the advertising efforts between the awards successfully kept audiences engaged? Did celebrities or those closely associated with celebrities influence your opinion about a product or brand featured? Comment below with your thoughts!

A couple nights ago, my RA was doing her door-to-door checkups when she came across my roommate and I discussing the BAFTAs (aka the British Academy of Film and Television Awards). We were talking about the typical stuff such as who was there and who we think had won when my RA interrupted and asked puzzledly, “The BA-who?”

For her, she hadn’t heard of the BAFTAs and didn’t know what they were. Even when I explained what the acronym stood for, she still didn’t understand. Eventually, I referred to them as the ‘British’ Oscars.

Although this explanation gave my RA a better grasp on what the ceremony was, it led me to wonder just how popular the BAFTAs were in the U.S. To be honest, the only reason why I knew about the ceremony was because some of my favorite celebrities, Prince William and Kate Middleton, advertised it on Twitter. Does social media always attract the BAFTAs’ viewers?

To find my answer, I first had to watch their most recent show which were the British Academy Film Awards.

The British Academy Film Awards were held on February 10, 2019 at the Royal Albert Hall, London, UK. The show featured notable (and nominated) actors like A Star Is Born’s Bradley Cooper, Black Panther’s Letitia Wright, The Queen of Scots and Suicide Squad’s Margot Robbie, and many more. Some of the film industry’s biggest winners were movies such as The Favourite and Roma which together won 10 BAFTAs.

The awards were televised on the British network BBC One, but for North Americans, it was on the American network, BBC America. Although having them broadcasted on BBC America was a great tactic to bring in an American audience, not that many people have access to that channel. This led the BAFTAs in recent years to heavily rely on social media platforms to advertise their show.

According to BAFTAs’ 2017 annual report, they create awareness by paying and partnering with Snapchat, Facebook, and Twitter to increase social engagement. This includes streaming live footage from the event along with hashtagging #BAFTAs or #EEBAFTAs. I have to say this strategy is smart since according to Edison Research, about 80 percent of North Americans had an online presence by 2017.

Thanks to BAFTAs’ tactics and others, their 2017 online engagement totaled in 104,509,190 people. These engagements also include visits to BAFTAs’ website, organic visits on Facebook, and organic impressions on Twitter. This was an increase of 96 million from 2016.

Another strategy the BAFTAs use is posting videos from their shows on to YouTube. Currently, their most popular video from the British Academy Film Awards is Dev Patel’s Supporting Actor acceptance speech for 2016’s Lion. It has about 820,000 views.

The BAFTAs are killing their social media marketing and I hope by then end of 2019, they gain an even a bigger audience.

Have you watched the BAFTAs this year? What do you think of their marketing strategies?

Let me know in the comments!

Coming to theaters this Valentine’s Day, a former special forces operative, Wade Wilson, is faced with a new kind of battle when he is diagnosed with cancer. He and his heartbroken girlfriend, Vanessa, grapple with what could be his last few months on this world. In desperation, he finds a brief glimpse of shimmering hope in a dangerous experimental cure. With this new found chance to reclaim his future with Vanessa, the brave young fighter goes forth into the fight of his life. This all sounds like a nice heartwarming romantic movie for a Valentine’s Day date, right? Well, it may very well be a great date idea, however, this summary describes the beginning to the movie DeadPool, a movie that can’t be much further from a stereotypical Valentine’s Day movie.

Featuring none other than Marvel’s now iconic “merc with a mouth”, Ryan Reynolds will star as Deadpool in his very own R rated antihero adventure full of ultra-violence, crude humor, course language, and saucy remarks. While some recent advertisements might suggest differently, by simply viewing the Deadpool trailer in the link above, any potential moviegoer would pick up on the offbeat sarcastic tone of the film. Deadpool is a character loved by fans for his ability to break the fourth wall and to satire the more stereotypical super hero movies.

It is only fitting, therefor, that the movie’s advertisements are equally self aware. By jokingly advertising itself as a romance and by opening on Valentine’s Day, Deadpool is humorously showing the audience the style of comedy they are in for. The character, Deadpool, is notorious for breaking the fourth wall, thus he can directly address the movie going audience in his trailers, allowing for such commercials as this. Aired during The Bachelor, Deadpool appears holding a rose while talking seductively to the audience about how his story was actually, “a love story”. This satiric take on The Bachelor’s iconic rose is contrasted by the action scenes and comedic remarks that immediately follow, showing that while, yes, romance does play its role in the movie, romance definitely does not define the movie’s genre.

While it is certainly not a typical Valentine’s Day romance, but instead an action packed comedy of sorts, many couples will likely be including this interesting piece of cinema into their Valentine’s Day schedule. These ironic advertisements seem to be hitting their mark as Deadpool’s interesting “charm” appears to be making quite the impression.