Social Media is a large part of everyone’s daily lives. Twitter, specifically, has roughly 336 million users (statista.com 2018), so it makes sense that companies would use this site to interact with their customers. Almost every company has a twitter to do this, but some companies are better at it than others. Twitter is a great place for companies to form their brand identity because of the freedom of the platform.  Certain companies stand out because of a few things; one of these is their timeliness. They talk about things that are happening now and that would only be relevant to the consumer during a certain time period. 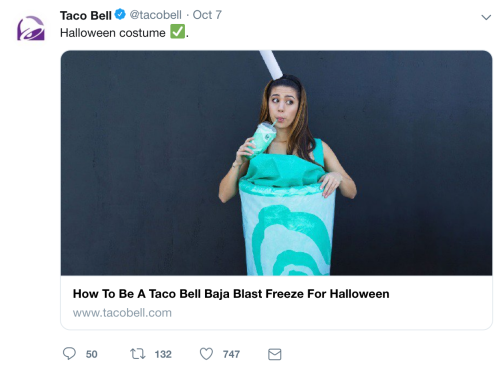 These are examples of timeliness on twitter from Charmin and Taco Bell. Both posts are fall and Halloween related which only happen during a certain time. If these posts had been posted in the middle of summer, people would have been confused, and they would not have been as effective.  The brands use humor in their posts to indirectly communicate with their consumers in a unique way, defining their brand identity.

Another way brands stand out on twitter is the relevance of their tweets. They know the appropriate time to interact with consumers and the appropriate thing to say. Brands interact with consumers directly in humorous ways to draw attention to their company while creating an atmosphere on twitter where consumers feel close to their favorite companies. Consumers feel as if they are part of the brand and marketing because brands are humanizing themselves to become more relatable.

These are examples of interactions between consumers and brands. Taco Bell found a humorous tweet about a couple who loves taco bell. The original tweet did not even @ Taco Bell, but the company was still able to find this indirect mention and respond to it humorously. It’s a simple response, but got people’s attention. This tweet got a lot of engagement because of the humor of the original tweet and because of the acknowledgment Twitter gave it. Wendy’s found a direct mention where a consumer got a Moana shaped chicken nugget. They took more of a dry humor approach by simply saying “you’re welcome”. These brands took these chances to respond to consumers appropriately according to their brand identity. They were timely and relevant responses that brought attention to their company.

Brands use twitter as a platform define who they are and what they are about. It is a comfortable and free place to interact with consumers and bring humor in a different way to their advertising. They can define their voice and their brand personality easily through conversations with their consumers. Social media has become a large part of all of our lives but along with this has changed company advertising forever.