Retail is an industry in which products need to be sold in creative, exciting ways. Clothing stores specifically have to think outside of the box to sell their clothes, and while the holidays are usually the most wonderful time of the year, they are the most stressful time of the year for those working in retail. With the seasons changing, even more pressure is placed on stores to get rid of their summer stuff and start pushing their new fall and winter products. Not only do employees have to work long shifts on the holidays and deal with high-stress shoppers that forget those in retail are also humans, but they have to think of innovative ways to market and put in extra hours to design and prepare the stores. Because the holiday season is such a big deal for retail stores, they must start selling and advertising for them months in advance.

Working at Altar’d State, I have experienced this firsthand and seen the variety of methods the store has come up with to get customers excited for the holidays, even in the heat of early October. Back in August, the company posted on their Instagram and Facebook accounts that they were accepting customers’ pictures of their favorite holiday memories to be displayed in their stores. 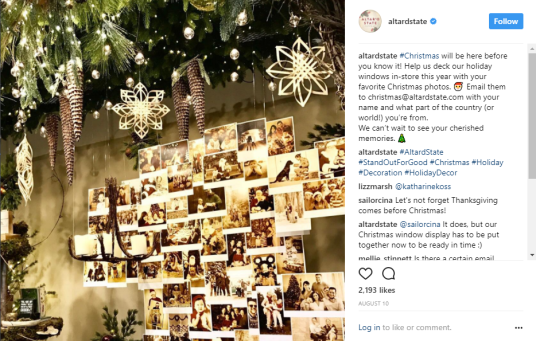 This clever kind of marketing is important for stores. It gets shoppers interested and involved, and it makes them feel special. However, it can come with some negative feedback.

Meanwhile, others are excited for the change and ready for the holidays to just get here already.

Altar’d State even went the extra mile to get their customers involved and pumped for the holiday season quickly approaching by hosting a window premiere party including hot chocolate, coupons, and new decorations all over the store. 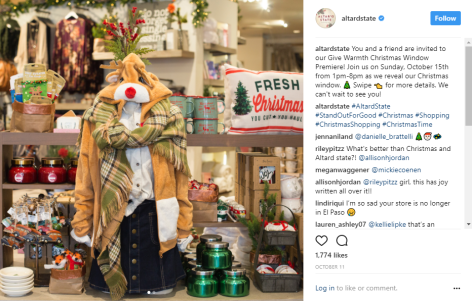 These are just a few examples of the brilliant ways to promote the holidays. And since stores start early, they have to think of multiple ideas to get customers shopping in as early as September and October. So whether you’re ready or not for the upcoming holidays and hearing Christmas music nonstop the day after Halloween (or even earlier), it’s coming and will be at most stores soon! My advice: avoid Black Friday like the plague and get your shopping done early.