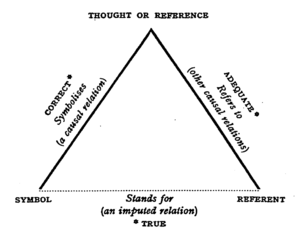 The semiotic triangle comes in different forms (although generally in one shape and size) but generally the idea is the same. You have a referent which is what is being represented, a symbol or image that represents that referent, and you have a thought or a concept which is everything you think of when you see that symbol.

When you see Sammy, what comes to mind? Sammy Seahawk is the referent and this image of Sammy is our symbol. What is our thought or reference then? It can vary from person to person. When I see this symbol, I think of all of the students at UNCW and how Sammy is meant to represent them. Others may see him and think of athletics and might think of a memory of when they saw the Sammy Seahawk mascot at a game. It can even bring a feeling of joy when you see the symbol.

So what does Sammy mean to you? What thoughts or emotions come to mind when you see our mascot?