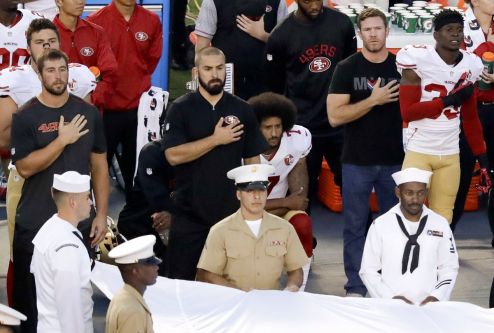 On August 26th, 2016 Colin Kaepernick refused to stand for the national anthem in a preseason game. His actions sparked a worldwide controversy and a divide in public opinions. Kaepernick recently stated to the NFL media, “I am not going to stand up to show pride in a flag for a country that oppresses black people and people of color”. Was he right in choosing this public forum to “voice” his feelings? The 49ers released an unbiased statement regarding the situation and Chip Kelly said he would not tell him what to do and he neither supports nor criticizes Kaepernick’s action.

Kaepernick’s choice of not standing during the national anthem was in relation to the recent police brutality breakouts all over the United States. Although he is biracial, he stands firmly in his belief that our country is not just when it come to the treatment of it’s citizens. Kaepernick is not looking for approval from teammates, coaches, or fans, he strictly took his stance based on his emotions on the subject. He has been having these strong feelings for a few years now and is just now “voicing” his opinions on the matter.

Pathos is a rhetorical device that is used for creating an emotional response from the audience. Kaepernick believed that by not standing up during the national anthem he was making a stand against police brutality. If his goal was to evoke an emotional response from the audience, then he definitely achieved his goal. After the protest, he became a trending topic on most social media channels. There were many people all over the country who were expressive about how they felt towards Kaepernick. There were many who were angry because it is considered disrespectful to not stand during the national anthem. Then there were some people who agreed with Kaepernick because they are also angry about the police brutality.  The pathos created from the situation was mainly brought about on Twitter. Several posted tweets about their reactions. This tweet from, @Dick_Blinken, reveals an opposing position to Kaepernick’s expression of his opinion.