Vacation and tourism advertising is no stranger to the American market, but they typically are of luxurious and tropical escapes. Last month, though, Haiti launched its first ever television advertising campaign that is targeted specifically to Americans, encouraging the market to visit their country.

As traditional tourism advertising is generally centered around an already present tourism location, Haiti took a different approach. Using the message of “Haiti: Experience It!” the country is targeting Americans to visit the area in an attempt to revamp its economy and promote the accommodations it has to offer as opposed to the negative perceptions some may have, such as the state of the country since its earthquake or the fact that it’s not a vacation-prone location.

By launching the campaign towards a specific intended audience, Haiti is searching for consumers of a particular demographic. According to the Associated Press, the commercial has been in the works with Northern cable companies in the New York and New Jersey areas. Liaisons in these states are running social media accounts, such as the one seen below. 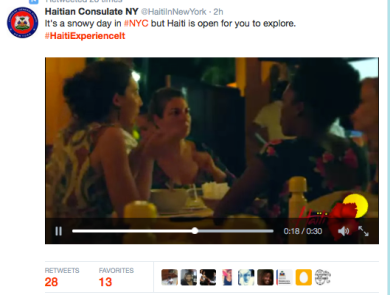 Utilizing a common Public Relations and Advertising strategy of “come see for yourself,” the government is tackling the issue of its poor country and inviting consumers to experience the uniqueness of their country. Haiti has a YouTube channel aimed at sharing content on the country, encouraging visitors to “Come visit Haiti” and “Come Experience Haiti.” Additionally, their government website features its history, culture, and nature–all  inviting certain demographics to see the country firsthand.

Do you think this campaign is effective?