If you haven’t heard yet Doritos is trying to crash the Super Bowl. This is all a part of a four-step process where Doritos allows people to compete globally to create a 30-second Doritos brand commercial to air during the broadcast of Super Bowl XLIX. This competition started eight years ago, and each year it is revamped to keep it new and exciting. This years special twist is the winner will score their dream job working for Universal Pictures and a guaranteed US one million dollars. Talk about an awesome opportunity!

Commercials were due on November 9, 2014, and voting for the best ten semifinalists started in early January. With the Super Bowl right around the corner, people only have until the end of today, January 28, 2015, to make their vote count, so head over to https://crashthesuperbowl.doritos.com/finalists to vote for your favorite. Don’t miss out on your chance to help the creator of your favorite advertisement’s dream become a reality.

Still having trouble choosing your favorite advertisement? That’s okay, Doritos created The-Face-O-Rater to help you chose. According to Doritos “when it comes to what you like, your face never lies”. Doritos has created an application on the website that allows you to watch the videos, and while you watch Doritos accesses your webcam to use motion capture technology to detect how much you enjoyed the commercial. At the end of the commercial viewing it gives the viewer a rating of one to five stars to determine how much they enjoyed the advertisement.

So what do you think? What advertisement is worthy of the grand prize? Comment below to let us know, and don’t forget to tune into the Super Bowl XLIX live on Sunday to figure out who won! 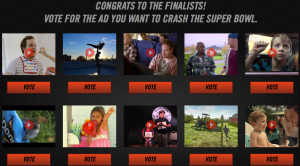