Everyday you as a consumer are exposed to hundreds of thousands of brands. Over the decades the shopping industry has exploded with most brands disappearing at the same rate new ones appear, yet some brands have stood the cluttered test of time – one of those is Macy’s.

Created in 1858 by Rowland Hussy Macy the Macy’s store was originally a dry goods store. Macy’s started to gain notable recognition in the 1900s with its holiday window displays and the hiring of Santa Claus for the stores. In 1924 the store moved to its current NYC location, on the corner of Broadway and 34th Street. This year was also the first Macy’s Day Parade, which was organized to celebrate immigrant employees new American Heritage.

Macy’s isn’t the only iconic retailer – Sears Roebuck ring a bell? Starting in 1886, the mail order company prospered as it was able to provide low cost alternative to farmers. As mail order plants transitioned into stores, Sears found their place in city life and the retailer soon became a retailer giant. Today the store owns 863 mall-based operations and 1200 other locations including hardware, outlet, tire, and battery stores. 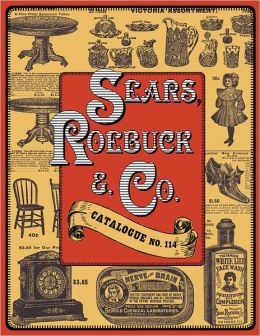 Nowadays Macy’s and Sears are direct competitors, but it seems Sears, the company who invented mail order, can’t quite figure out online order.

Holiday sales account for a large indicator of profit margins and often depict the health of a company. Sears seems to be in critical condition – US stores suffered a 9.2 percent drop. In decline for some time now, and with little to no improvement, some speculate the store could be gone by 2017.

The history of an iconic brand is something that should be cultivated in your identity – it induces credibility, shows longevity, and prompts nostalgia. Yet being historic isn’t merely enough to remain vibrant. Iconic companies remain iconic because they are able to cultivate lasting relationships with consumers – at all time periods – and that means evolving.

Looking at each retailers attempt to reach customers during the holiday seasons could explain Sears 9.2 percent drop in sales. Both have social media accounts, yet social media presence is widely disproportionate. Macy’s Instagram account has 150,00 followers while Sears has two Instagram accounts – “Sears” and “Sears Style” – yet both of the followers combined don’t even reach 8,000. A huge missed opportunity for Sears – Instagram is leading the way in social media, growing faster than Facebook, Twitter, and Pinterest combined.

According to Gary Vaynerchuk’s article “The Road to Black Friday: Macy’s vs. Sears”, the use of social media by Sears is lazy. Choosing to ignore the social media culture they have posted irrelevant and uninteresting content such as a link to one of their commercials and an original YouTube video. While Macy’s post content that is culturally relevant, trendy, and formed around pop culture.

Our culture today has switched, as James Twitchell describes it, “In the last generation we have almost completely reversed the poles of shame so that where we were once ashamed of consuming too much (religious shame), we are now often ashamed of consuming the wrong brands (shoppers’ shame)”. In this day in age a brand establishes and remains relevance by relationship cultivation, reinforcement, and engagement forged through technology – the Internet and social media. It seems Sear’s inability to adapt to technology has prevented them being able to participate in the younger crowds culture leading in profit and brand influence. As an American brand we hope Sears can get back into the groove but as they stand now they are the weakest link.