On January 10, Eric Lawson, an actor who played the “Marlboro Man” in print and outdoor advertising for the cigarette brand from 1978 to 1981, died from chronic obstructive pulmonary disease, commonly known as COPD—a disease frequently caused by smoking. Lawson was 72.

Lawson isn’t the first Marlboro Man to die from a smoking-related disease. At least three other men who acted in the iconic campaign died due to causes linked to smoking cigarettes. David Millar died from emphysema in 1987, Wayne McLaren from lung cancer in 1992, and David McLean from lung cancer in 1995. McLean’s widow sued Philip Morris in 1996, claiming McLean had to smoke up to five packs of cigarettes per TV commercial filming. TV commercials for cigarettes were banned in 1971.

The rugged, masculine Marlboro Man campaign was introduced in 1955 to market Marlboro to men, because at the time, filter cigarettes were regarded as feminine. The campaign ended in 1999, when the use of humans and cartoons (see Joe Camel) were banned as a result of the 1998 Master Settlement between tobacco companies and the state attorneys general. Today, cigarette advertising is primarily in magazines and retailers.

Now, the very product the Marlboro Man advertised is ultimately taking away the actors’ lives. After he hung up his hat for Marlboro, Eric Lawson was an anti-smoking advocate, appearing in a public service announcement and a segment on Entertainment Tonight about the negative effects of smoking. 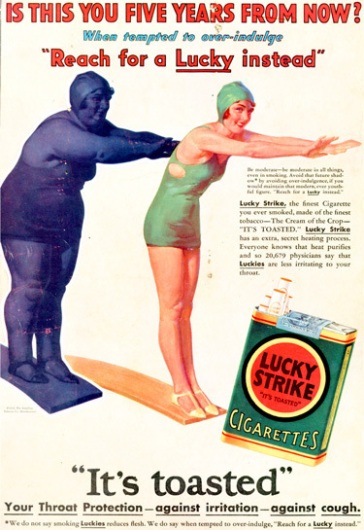 Looking back at the cigarette ads of yesteryear, they definitely weren’t ethical, but they sold a lot of cigarettes. The Lucky Strike ad from 1930 claims a pack of Luckies protects against obesity. Today, we are more educated and know the real harm cigarettes cause. The percentage of adult smokers in the U.S. has dropped from 43 percent in 1964 to 18 percent today. (http://www.pbs.org/newshour/bb/health/jan-june14/lushniak_01-12.html)

With the rising popularity of e-cigarettes, brands such as Blu are taking a “tough and masculine” approach. Does this ad remind you of something?

Advertising for e-cigarettes does not fall under the same regulations as tobacco advertising because the product does not contain tobacco. However, e-cigs have not been proven safer than traditional cigarettes. Did Blu make an ethical choice by channeling Marlboro’s now-infamous campaign that made Marlboro the most popular cigarette brand in the country? Blu is a young brand that is advertising in a fashion similar to Marlboro did when it was new. If e-cigs are found to be not at all safer than tobacco cigarettes, should they be subject to the same regulations? What will it take to regulate e-cigarette advertising? These are questions to ask about the ethical implications of cigarette advertising today.