If one were to look at the Oxo Tower in London at night over the past few days, they might notice a striking difference in the lighting of the prominent building.  Covering the side of the tower are the famous control buttons of the PlayStation brand that replaced the usual OXO that can be seen on the tower.  In regards to the holiday season and the release of their newest PlayStation 4 product, the brand decided to take their advertising to new heights. Sony paired with Manning Gottlieb OMD media agency to change the letters for the first time in the building’s eighty-five year history. 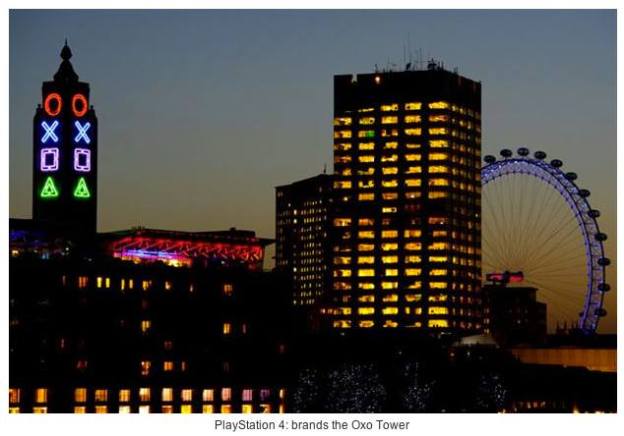 When relating this recent event to Kenneth Burke’s Theory of Identification, we can see a clear connection between the consumer’s ability to recognize the PlayStation symbols, and the persuasive technique used by the brand.  Burke’s theory states that persuasion can only be communicated effectively when the two parties (the consumer and the brand sharing the product) have something in common. This means that only people who know what the symbols represent will be able to understand that this is an advertisement for one of the largest gaming systems in the world.

This form of brand advertising seeks to create excitement and anticipation for the upcoming PS4 release on November 28th in the United Kingdom. Consumers are unconsciously motivated to have the PlayStation product on their minds when they see the symbols lit up every night.  This could lead to consumers talking about the product to friends or on social media or even purchasing the product when it is released.  In fact, 14.3 million people had tweeted about the lights within the first 24 hours that they were used.

Overall the strategy used by PlayStation to advertise and motivate their publics to think about this new product was a creative and original way to reach potential customers.  This is a method not commonly used and created a large amount of social media buzz that was beneficial to the brand.  What are some original and uncommon ways that you have seen brands advertise? Have you seen any brands advertise in uncommon places?