Lately, companies have decided to start selling a product within the realm of “water enhancing” powders. The Kraft Foods company is doubling down with a liquid water enhancer aimed at a younger demographic. Their slightly expensive product is called MiO, and it has been marketed to appear cooler than the plainer Crystal Light packets. Starting from the packaging, MiO comes in a small, drop shaped, portable container, which makes it easier to use in any quantity. In fact the product’s slogan is “Add a little or a lot!”

Crystal Light has recently introduced its newest product, Crystal Light Liquid. It seems like a better tasting, healthier take on the MiO brand concept. Just like MiO, Crystal Light Liquid is a liquid drink mix that one can add to any glass or bottle of water, eliminating the mess and the science of powder drink mix. There are currently six favors to choose from, including Strawberry Lemonade, Blueberry Raspberry, Iced Tea, Mango Passionfruit, Peach Bellini, and Pomtini. Not only are the mixers 0 calories, they are also gluten-free. It’s Crystal Light’s way of saying that one can now “indulge in all your favorite flavors without the added calories.” In addition, its compact packaging makes it easy to take anywhere on the go.

I think Crystal Light has done a better job advertising their product. I specifically like their television commercials for it, because they are quite interesting. They feature several glasses of water; each with a different amount of the liquid mix in it, while in the background there is a woman’s voice saying “I like to think of myself as unpredictable”. There are other similar commercials with the woman saying other things about her mood or personality. The idea is that one can put in as much or as little of the mix as they want, to suit whatever mood they may be in. “Six Flavors. Zero Calories. Endless Possibilities. For Every Shade of You.” This is an interesting angle to sell to people because they no longer have to worry about how much powder mix to put with a certain amount of water. Instead, the consumer is in power and gets to be the master mixologist. MiO’s commercials are these awkward commercials with these crossbreed animals engaged in conversation. I think it was supposed to be a unique idea targeting a younger crowd, but for me it was a complete miss. 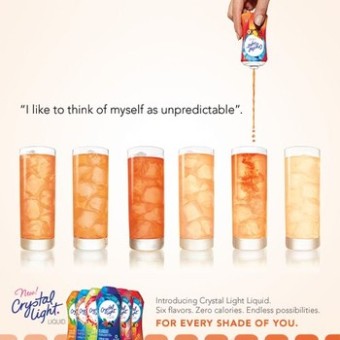 Although MiO gets credit for the originality of the idea, it appears that Crystal Light is firing back full throttle with its own, unique twist on advertising it. Not to mention Crystal Light is already has its common household name to back it up. Which do you like better? Find out for yourself.