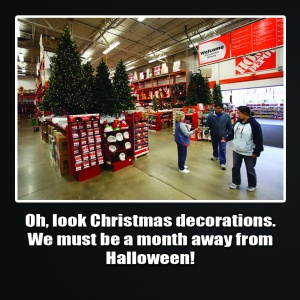 Year after year it seems as though stores are putting out their holiday décor and products earlier and earlier. Towards the end of September and the beginning of October, we are forced to start thinking about Halloween. What kind of candy should we buy? How should we decorate our home? And before Halloween is even over, we are then faced with these same questions over Thanksgiving. If that’s not enough, stores have even started to throw Christmas in the mix as early as the first week in November. So how are we supposed to plan for not one, not two, but three holidays all within a few weeks!?

With various stores being as competitive as they are, most businesses have been pushing their holiday campaigns earlier and earlier in order to gain an edge in overall sales. Long gone are the days of waiting until Black Friday to unveil their Christmas campaign. Stores like Wal-Mart, Target, Macy’s, JCPenny’s and Kohl’s have all started to decorate their stores for a holiday that’s still over a month away. Is it just holiday madness or capitalistic greed spearheading this holiday decoration inflation? Did I mention that just about everyone has already revealed their Black Friday shopping ad as well?

Nordstrom however, has taken a stand in recent years against this now frequently practiced tradition. They have stated that they will not be decorating their store for Christmas until the day after Thanksgiving. Why you ask? As explicitly stated on various signs hung around their store and on their doors, they believe in “celebrating one holiday at a time.” So the big question is: does delaying their holiday ad hurt their overall sales? In short, no. 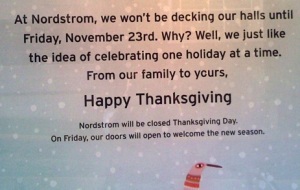 Most retailers want to start their holiday campaign as early as possible because their sales tend to increase. However, it important to note that while many stores that do this have impressive 3Q sales to report, many tend to dip in the 4Q because of reduced prices on items that failed to sell during the holiday season. Nordstrom has been the exception to this though because instead of selling discounted clothes that failed to sell earlier, they roll out new clothing designs the week after Christmas.  This tactic, coupled with the delayed seasonal ad, has boosted their 4Q earnings.

In closing, I would like to say that I am thankful for a company like Nordstrom for outsmarting everyone and proving that you don’t have to prematurely impose the holiday season on your customers in order to be successful.

What do you guys think?