The latest news on the Starburst brand is that Starburst has launched a new campaign where it focuses on “contradictions.” The most recent Starburst commercial plays on the candy’s “contradiction” of solid, yet with a juicy consistency. The company’s new commercials come off to be very strange, which is exactly the point. With all of the commercials that are constantly played throughout the world, more specifically the United States, it is getting increasingly difficult for advertisements to stand out among the others. In an effort to stand out, companies are creating commercials that seem to be strange but memorable. An example of one of these weird Starburst commercials is the commercial where a Korean man is portrayed as a Scottish man due to the bagpipes and kilt he is wearing. This man is standing with a child who is dressed the same way but eating a Starburst and states, “One contradiction eating another!” Another commercial consists of a screaming mime that is supposed to portray a contradiction. Clearly mimes are not supposed to talk. The most famous of these Starburst commercials though, is a commercial where a dog is riding in the car with a group of men. The dog has its back side sticking out of the window of the moving car, and one guy in the car claims that the dog is a contradiction for doing so, since normal dogs stick their heads out of windows. It is clear that this commercial was effective in at least making a memorable impact on consumers, whether the impact was positive or negative. The commercial’s growing popularity is displayed through the 43,900 results that appear on Google after searching “Starburst your dog is a contradiction”.

This Starburst commercial was very successful; however there is much scrutiny that is coming from it. There are many articles and blogs published about how the people shown in these Starburst ­­commercials are not actually a contradiction. One article specifically, titled “Ass-Backwards Starburst Dog Isn’t Really a Contradiction” discusses how the people in these commercials have traits that deem to be opposites, but are not actual contradictions. Author Tim Nudd states, “Now, we get this new spot with a dog who likes to hang his ass out a car window—and he’s called a contradiction. Isn’t he really just a dog with an unusual preference?” There are numerous articles similar to Nudd’s, claiming that these commercials do not actually portray contradictions at all. Therefore, their whole message is distorted and their credibility is in question. Both sides can be argued extensively due to the fact that the word contradiction has many different definitions.

Under the Dictionary.com definition, a contradiction is a “person, thing, or situation in which inconsistent elements are present”. Based off of this definition, these commercials would correctly portray contradictions. However, under other definitions such as, “a contradiction is two propositions used in combination where one makes the other impossible. It is something that is A and non-A at the same time. A contradiction, therefore, cannot exist in reality, since existence exists” would not consider the people or the dog in the Starburst commercials to be contradictions. These commercials are being closely examined for the accurate or inaccurate usage of the word “contradiction” by many viewers all over the world; however, this brand of candy’s new campaign theme, “Celebrating the contradictions that make life so interesting,” is capturing thousands and thousands of fans daily. The Starburst brand has also created an online “Contradictions Project,” which is seeking to involve fans all around the nation to log on to the Starburst Facebook page and submit common contradictions of their choice. For every contradiction a fan lists, that person will be added to the $250,000 donation, which is partnered with VH1’s Save the Music Foundation, to restore music programs across the country. Whether these new Starburst commercials are considered to be weird, incorrect, humorous, or just plain stupid, the reality of it is, their new theme is making the Starburst brand even more popular than it already was. 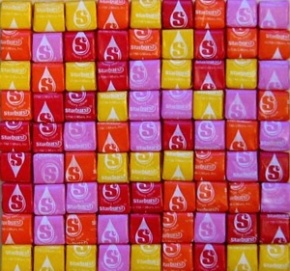