An advantage to the promotion of breast cancer-awareness for celebrities can be their ongoing fame and popularity. Their voices are being heard, and can get the point across to both women and men that this is an urgent issue and should be taken very seriously. Various celebrities have been diagnosed with breast cancer and are using their popularity, courage, and personal experience with the fight to serve as a source of inspiration to other women and men. It sounds strange to put men in this category; but yes, men can also be diagnosed with breast cancer.

An article titled “Celebrity Breast Cancer Fighters”, located on the knowcancer.com website, releases that Cynthia Nixon, popularly referred to as “Miranda” from the show “Sex and the City”, was “diagnosed with breast cancer during a routine mammogram in 2006. She initially battled it without a public announcement of her diagnosis or treatment in fear of related stigma, but in 2008 she announced it to the world in an interview with Good Morning America.” Nixon portrayed much bravery and thoughtfulness throughout her interview as she explained with much understanding why some women fear yearly mammograms. Nixon addressed this fear and also offered positive, yet convincing advice to all who were listening. 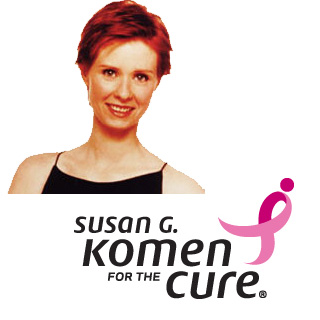 Celebrity status has been a great way of reaching a wide-ranged audience, proving that numerous celebrities’ lives have been unavoidably interrupted by breast cancer that they are not alone in this fight. Professional athletes and teams are also jumping on the awareness support-train. The NFL, its club teams, and all of the professional players in the association are wearing pink with pride in order to support the fight against breast cancer. According to the official nfl.com/pink website, the NFL’s “A Crucial Catch” campaign, in partnership with the American Cancer Society, is “focused on the importance of annual screenings, especially for women who are 40 and older. Throughout October, NFL games will feature players, coaches and referees wearing pink game apparel, on-field pink ribbon stencils, special game balls and pink coins – all to help raise awareness for this important campaign.” These organizations are aware that breast cancer can happen to anyone and having this kind of support could mean the world to those diagnosed.  An auction will later be held by the NFL with proceeds going to the American Cancer Society’s CHANGE program. All the pink apparel worn by the coaches and players will be auctioned off, along with special pink game footballs.

According to www.cancer.gov, breast cancer is the most prevalent non-skin cancer among women with 203,000 new cases diagnosed along with over 40,000 deaths in 2007 alone.  Using celebrities as spokespeople for the cause can be a great way to spread awareness and get more people involved.  Ultimately, this can get more money raised for research, treatment, and cures.  As previously stated, getting celebrities to speak out about breast cancer not only helps with current cases but helps in the detection process as well, for it promotes mammograms and routine check-ups.  It is great to see various celebrities and sports organizations come together to fight a cancer that is so detrimental to hundreds of thousands of Americans.