Yesterday, (Sunday, October 14, 2012), Felix Baumgartner made history when he broke three world records and attempted a fourth. “Fearless Felix” successfully broke the record for highest altitude reached by a man on a balloon, highest free-fall jump, first man to break the sound barrier without any mechanical propulsion, and came close to beating the record for longest free-fall.

Appropriately, Red Bull sponsored Baumgartner’s jump and named the mission “Red Bull Stratos.” Never has the slogan “Red Bull gives you wings” been so fitting. The purpose of this mission according to the “Red Bull Stratos” official website goes beyond setting records; this project also attempted to “transcend human limits that have existed for 50 years and to provide valuable medical and scientific research data for future pioneers” (redbullstratos.com). 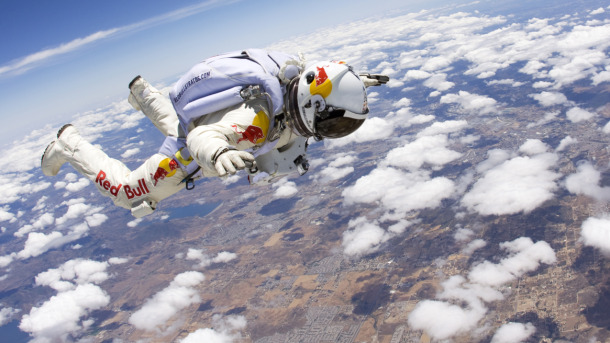 Although the scientific value of this experiment is important for advancement in the future, for Red Bull this is more than that. According to the Huffington Post, “Red Bull’s Facebook post-jump photo of Baumgartner gained almost 216,000 likes, 10,000 comments and over 29,000 shares within 40 minutes, and half the worldwide trending topics on Twitter were related to Red Bull Stratos.” That is monumental for the future of marketing. Baumgartner’s jump brought Red Bull media attention internationally, putting their brand out front. Even a Monster or Rockstar drinker may be swayed to buy a Red Bull, after seeing the “Red Bull Stratos” video.

Red Bull logos were displayed on Baumgartner’s suit, helmet, parachute, recovery helicopter, and capsule, making it clear they were a strong force behind this historical jump. Red Bull was also able to organize information about the jump, including the science and technology behind it, the history of jumps like this, information about Baumgartner and the team who made the jump possible, while also providing a live broadcast of the jump through their website. This essentially made them one of the largest resources for information on this event, if not the largest. Red Bull gains more exposure each time a user navigates to their website, where it is saturated with even more logos at the top of every page. To top that all off, according to Forbes, the “Red Bull Stratos” on YouTube gained 8 million concurrent views, which may be the largest live stream YouTube has ever conducted (beating the presidential debates and the Olympics).

Seven years ago, “Felix Baumgartner and Red Bull began to lay the groundwork for a stratospheric freefall that would expand the boundaries of human flight since 2005,” and here they are seven years later making history, and setting world records in many arenas (redbullstratos.com). Red Bull took a risk by sponsoring a potentially dangerous experiment such as this, but it was a success, and their logo will always be associated with this monumental event in history. Now even more, drinking a Red Bull will be always associated with the image that you’re a live on the edge, risk taking, and confident person like Felix Baumgartner. Red Bull now has one of the best tools on their side that a brand can have through this kind of association: mass exposure, not only here on Earth, but now into space.