When discussing brand identity, two important points are the “how” and the “why.” Why a business does what they do, and how they do what they do; the motives and the execution. A brand like TOMS shoes gets consumers hooked with the why. Blake Mycoskie was visiting a village in Argentina when he encountered the effects of poverty. He was forced to confront the number of children without shoes. This inspired him to start a new kind of for-profit business, one that donates as much as it sells. Thus, the TOMS shoe company was born with the slogan, “One for One.” With every pair of shoes purchased, TOMS donates a pair to children in need.

When the company began it was a risk. One that was not promised to prosper, but had good intent. The company began with three basic colors of the same type of canvas shoe, and has now expanded beyond Mycoskie’s wildest dreams. The brand identity of TOMS is simple: give. As Mycoskie states, “Incorporate giving into everything you do.” So what happens when the giver meets the thief?

Skechers is infamous for stealing other shoe companies product concepts. For example, in 2009 Reebok launched the “EasyTone.” In 2010, Skechers launched “Shape-Ups.” Both shoes were designed to provide the same benefit of turning everyday activities into an easy way to get fit. Now, Skechers has released a line of canvas shoes called “BOBS.” The shoes are nearly identical to the TOMS design and sport the same promise of donating a pair of shoes to children in need with every pair purchased. 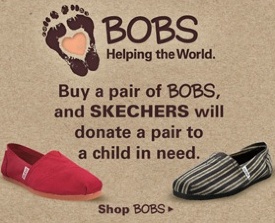 The problem is the public hasn’t accepted BOBS with the same open arms that TOMS was embraced with. BOBS has stolen the “how,” but lacks a convincing “why.” Has the thief gone too far this time? The reviews on BOBS have been less than satisfactory. The Skechers company has been called everything from fraudulent to mean-spirited. Their brand identity has been tarnished for their latest rip-off which seems to have struck a deeper chord with the American market.

Does it matter? The kids who need shoes are still getting shoes. Do they care if the label on their shoes reads BOBS or TOMS? Should we?