This Labor Day weekend, as thousands of North Carolinians made a trek to the beach, others headed inland to Charlotte in anticipation of the Democratic National Convention and the preliminary festivities. On Monday, the excitement was palpable in Uptown as “CarolinaFest” served to get audiences pumped up for the opening day of the DNC. The streets were overflowing with vendors, street performers, temporary exhibits and thousands of chanting supporters, who all came together in celebration of North Carolina’s first-ever national convention. 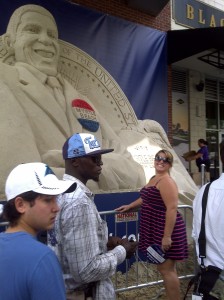 After experiencing the fervor first-hand, it was hard to imagine that (as right-leaning media suggested) the Democrats would have problems filling seats at either venue where the speeches were originally scheduled to be given. Convention officials were unfazed by this possibility and rightly so; enthusiasm at the event and via social media was at an all-time high for the first night of speeches. Signs were hung from various booths in the heart of the DNC activities to “keep calm and Tweet #DNC2012” and on the first night of speeches, viewers all over the country did just that.

In the opening night of DNC speeches alone; the continuously trending  topics #DNC2012 and comparable terms received almost 3 million tweets…roughly 3/4ths of the final tweet count (taken over the entire three-day period) of the Republican National Convention. While all of the openers were well received (the numbers don’t lie!), the most prominent twitter conversations took place during the speeches of the Mayor Julian Castro (of San Antonio, TX.) and our First Lady, Michelle Obama.

Mayor Castro’s speech peaked at 11,503 tweets per minute (TPM) which was higher than all of the GOP speakers excluding Mitt Romney himself. However, the “magic” really happened when Michelle Obama took the stage to officially open the convention. Peaking at 28,003 TPM, Mrs. Obama’s speech received twice the amount of “Twitter action” than Mitt Romney’s GOP acceptance speech, which saw 14,289 TPM at its peak. It is truly remarkable that one 25 minute speech could garner so much attention and foster a virtual discussion of mammoth proportions. While the content of the tweets in question undoubtedly varies, the important thing is that it got people talking.

The use of twitter as a forum for political discussion and debate among average Americans and major media entities alike continues to grow and evolve as we near the 2012 election season. Will this explosion of Democratic enthusiasm continue all the way to the polls? Only time will tell. One thing is for certain: Democrats are using all of their available media to ensure that their voices are heard.

(The twitter stats listed above were taken from the Twitter Blog (http://blog.twitter.com/) additional information regarding the DNC can be found at http://www.demconvention.com/ )