Valentine’s Day is a holiday dreaded by a great deal of people, both male and female, for various reasons. There is pressure on both genders to perform, declare emotions, and out-do previous years or expectations. Those who fail at this task of grandstanding may in fact find themselves without a date for next year. Okay, so there’s a ton of pressure on people in relationships, but what about those of us who are single? While some take pride in their solitude, others wish they had someone to be their valentine, and a few twitch at the mere thought of being in a relationship.

According to an article in the New York Times, being single is a prevalent occurrence these days with 59.9 million single women in America. This staggering rate may surprise some, but companies like Dove chocolate see these table-for-one ladies as a prime marketing demographic. They hope to strike a chord with this growing independent group by catering their advertising to the women who are without companions. That is why this year Dove has made a campaign to remind women Valentine’s Day isn’t just about romance.

Dove is banking on the stereotype that single women will turn to chocolate this year on Valentine’s Day. Instead of the standard “Call me” or “I’m yours” found on the candy hearts we used to share with our playground crush, Dove has created a host of witty comments and placed them on the inside of their chocolate wrappers. Some of the best include, “You’re gorgeous,” “Sometimes I buy flowers for myself,” “My flaws are fabulous” and even the ever so uplifting, “Love yourself in a moment.” The new commercial features women sharing their Dove chocolates with everyone from their barista to their neighbor, and most importantly, themselves. Is this a message of independence for the strong woman? Or rather, a cheap ploy based upon the assumption that women alone on Valentine’s Day will inevitably console themselves with chocolate? Either way it’s hard to dislike chocolate, especially when it’s making single girls smile and promising not to judge if we have more than one. 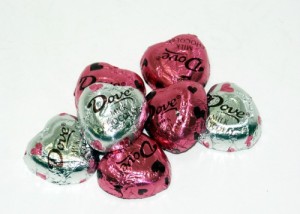