If you ask a kid what he wants to be when he grows up, he doesn’t think about the benefits, hours, or even how much he would get paid. They run on another type of scale dealing with popularity, familiarity, or uniform. A lot of kids originally hope to grow up to be like their mom or dad, no matter what job their parents may hold. For example, if you ask ten-year old Christopher Cannizzaro from New York what he wants to be when he grows up, he will tell you, “a Firefighter just like my dad”. Christopher was only ten months old when his father, New York City fire fighter Brian Cannizzaro, rushed to help the victims trapped in the twin towers on September 11th, 2001. 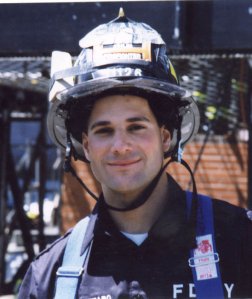 Only knowing his father through the pictures and stories told by his mother, Christopher plans to follow in his father’s footsteps. In this case, like many others, there is something much more powerful than the shared bond between this father and son dynamic. There is a legacy. Born in the flames of who they serve and in honor of the people of who they love. It is a brand. The brand of the firefighter.

As college students, we were about ten years old on September 11, 2001. We all remember where we were when the twin towers were attacked and the reactions of those around us. The devastation on every news channel overwhelmed all of us with an emotional bond unlike anything else before. A deep and powerful connection was made between every American, as we mourned the loss of our own. This was one of the most impactful creations of shared meaning within our country’s history; bringing our country together despite the color of skin, economic status, or beliefs. At that moment, we were united. At that moment, we recognized our heroes.

The aftermath of 9-11, showed how the strength of our nation helped us all to rise

and overcome tragedy.  With a death toll of 6000+ Americans, the light at the end of the tunnel seemed to be non-existent. The FDNY went into the flaming twin towers on the sunny morning of September 11th without an ounce of resistance.  They were the heroes that gave our country hope, and never gave up.  The appreciation we have for them as a brand of American heroes will never be let go and the strength we gained from that day will never weaken.

Before 9/11, many Firefighters were often the unsung heroes of our communities all over. Their job is to put themselves into the path of danger to save people’s lives and homes.  They protect where we live and some of them are volunteers. Living the life of a firefighter means serving everybody, no matter the circumstances. There is no special set of qualifications that you need to have to be rescued; they don’t even have to know you for them to risk their lives for you.  Every time a call comes in, they gear up knowing that it could be their last. On September 11th 2001, 346 of these extraordinary people made the ultimate sacrifice.. for you.

We are indebted to the 346 American fire fighters who lost their lives that day. Not just because of the day that we all remember but because of how they lived their lives and what they stood for. We all have something to learn from this. Coming together one day in September is not enough to honor these people who served our nation. It should be through our daily lives that we strive to serve and help others like they did for us. This is the brand of the Firefighter. The brand that symbolizes heroism and hope for all Americans.